Last week I decided to get a playmate for Brenna.  I am afraid it has been hard on her not to be able to go outside when she pleases and, though I am sure she will get used to being indoors only, I thought she might like to have some company.
I looked up pet rescue shelters on Friday and found that Madison only had the police department.  I suppose I could have gone in to Huntsville for more options, but all I really care about is that I am helping a cat.  I am not really picky about sex or color or anything like that.  Which is good, because Madison currently only had one cat impounded.  It was a kitten that had been picked up as a stray.  It was only about five weeks old.  It was all fur and bones and felt like it had a matt of fur by its jaw.
The police said they thought it might have brain damage because it held its head sideways sometimes when it looked like it was staring off into space.  I had never heard of an autistic cat, but it didn’t bother me much.  The cat seemed friendly, even though it trembled when I picked it up.  I paid the fifteen dollar adoption fee and promised to have her neutered when she reached sexual maturity.
I took her home and set up a small living area in the large half bath I have here so that I could keep Brenna away while she got used to me.  I sat with her for an hour or so while she explored, ate, and pooped.  I pet her gently when she wandered near me and was amazed that she would flop down and roll onto her back.  I had never had a kitten that wanted its belly rubbed so easily.  It wasn’t an act of submission, that I could see.  She just wanted a tummy rub.  And I am easily trained.
Later that night I worried that she might be deaf because, though she is skittish, she didn’t seem phased by the noise I made hammering on my new bookcases.  This is her exploring the box in which the bookcase came. 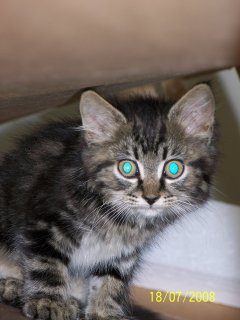 Originally I had pegged her for a boy, because she has a hair pattern that looks like two little testicles between her anus and what I took to be her penis.  So, I named her Albert, after one of my heros, ’cause she had this crazy hair and she looks like she studies things carefully.  Full name was Albert O. Finnegan.  (cats should have a full name)
We bonded pretty well, and she already loves me as you can tell in this pic.  I think it shows how beautiful she will be when she matures. 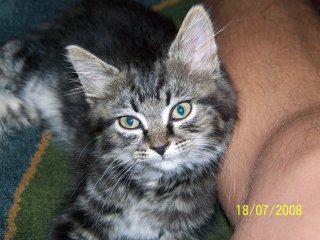 That night, though, when she was scratching at what i thought was just a mass of hair, it ruptured and the most god-awful stench came out of it along with pus.  I thought it had been a boil, then, so I cleaned and irrigated the wound and then called my little brother to get his advice.  He did a lot of veterinary work in preparation for his duties as a SF medic, so he knows more than me.
He told me just to monitor the wound and only worry if she ran a fever, got lethargic, the boil reappeared or the stench did not dissipate.  She was not very lethargic.  Not quite the rambunctious kitty she is now, but still quite active in her environment.  She didn’t know what to think about this other kitten. 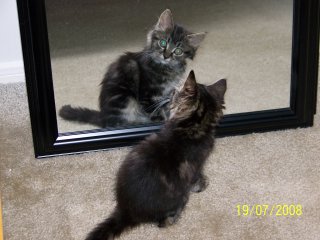 I began to see her exhibit the sideways head more often (see below), and I thought maybe it was due to the boil.  I thought maybe it just gave her pain to turn her head so she held it like that to look around.  The O in her name stands for Owl, even though I thought it might go away after the wound healed.  But the stench did not dissipate.  And she had no compunctions about rubbing all over me, which was kind of sweet but pretty gross.  I slept on the floor with her that night and she kept getting up on the pillow by my face.  But she was purring so loudly I couldn’t push her away.  She was so excited to have a home. 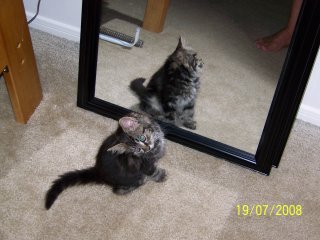 The vets informed me (when I took her this morning) that I might need to change her name.  They thought it was pretty funny.  They didn’t give me a discount for making them laugh, though.
at July 20, 2008

Email ThisBlogThis!Share to TwitterShare to FacebookShare to Pinterest
Labels: a day in the life, pets