I love my coffee. Love. It.
If I was the Pope and I could make someone a saint, it would be the guy that figured out that we could eat these things:

It was a pretty ballsy move, or just stupid, since generally little red berries are a no-no as far as eating stuff on the trail goes unless you know exactly what they are. It is like eating wild mushrooms, only a more colorful version of culinary roulette.
Legend has it that it was an Arabian shepherd (actually, he herded goats, so what is that, a gotherd?) named Kaldi who figured it out. As the story goes, he was up on the mountain (because it’s always mountain grown, right?) with his goats when he lost track of some of the more rebellious goats and had to go in search of them.
When he found them, they were dancing and frolicking under a strange tree with red berries, not caring at all that he had had to go out of his way to find them. They were goats, after all. But the shepherd boy (gotherd?), instead of scolding them, succumbed to goat pressure (Hey, kid, want some berries?) and ate some of the red berries himself.

Soon he found himself dancing with his goats, probably telling them how much he loved them and wishing he had a cell phone so he could call his ex-girlfriend. Luckily, they didn’t have cell phones until later, because the engineers needed coffee with which to stay up all night designing the circuitry for the little things, so he was spared from any coffee dialing, but he probably nevertheless had a very deep and meaningful conversation with the goats.
It must have been like crystal meth to a system completely unused to chemical stimulation. He probably came down the mountain with red juice stains all over his face twitching like Tweak. But he brought down a sackful of the berries to share with his village (to support his own habit, you know; it was sad, really).
I am not sure when they figured out to dry them, roast them, grind them, and boil them. They probably dried them just out of a matter of habit, and the roasting probably came from the practice of toasting other spices. But one thing I hadn’t known until I was enlightened by Alton Brown was that the caffeine levels dropped with roasting.I never would have believed that these: 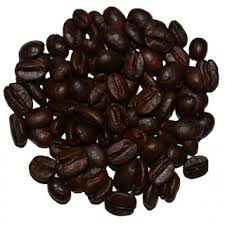 were chemically inferior to these: 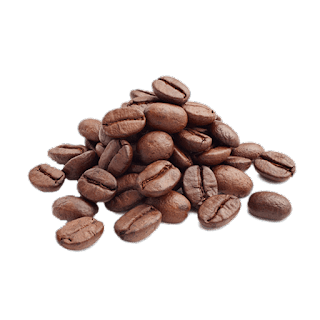 (I should have been suspicious because they were French roasted, after all, and you just can’t trust those French roasts)
The darker the roast, the less the caffeine. I had always expected dark roasts, because they have such a bold flavor, to have more caffeine, but it is not so. Espresso roast actually has the least amount of caffeine in it than any other roast, from what I understand. That must be how the Existentialists are able to remain so detached.
So now I try to find the lightest roast I can find, but it is difficult, because it seems consumers all want to have dark roasts. Probably because they remain uninformed. I may have to start roasting my own beans or buying them from a specialty store where they will roast them to my specifications.
That may seem like a behaviour as indicative of addiction as growing my own bud, but it just makes sense. Coffee is sort of a luxury, and so I think the experience should be luxurious. Anyone who doesn’t think it is a luxury should check out the prices in their nearest Starbucks. And Starbuck’s coffee sucks. I think that if it costs a little more or takes a little more time to make gourmet coffee at home so that it can be that much better of an experience, then it is worth it.
I used to balk at buying high quality beans until I looked at how much I paid for even a cup of inferior coffee at the gas station. If I am paying $2 for a large coffee then I am being a cheapskate to worry about paying 12 bucks a pound for some Hawaiian gold. (Kona, that is). Why, it was downright unAmerican for me not to invest in quality beans.
Truly.
Coffee is as American as Apple pie (which is why it is no coincidence that pie and coffee go so well together). During the run-up to the Revolutionary war was when America switched from tea to coffee. (See the smugglers didn’t charge taxes on the coffee.) You could tell who was a Whig or a Loyalist by what they served with cake (this was before the time of Johnny Appleseed,so there was no baseball and Apple Pie).
After we beat the British back we brought back the casual drinking of tea (for the sake of our little girls) but it never regained its pre-Revolutionary popularity. Unless you were a little girl or one of her dolls. The comeback of drinking tea in earnest I think owes itself more to the Eastern culture and the hummingbird bait that passes for tea down south. And also Star Trek.
I have two absolutes when it comes to the culinary arts.
These rules served me well throughout my entire military career, and they serve me well today. But whenever I can mix my rules, life is even sweeter.
My current drug of choice is a simple iced coffee I make by simply pouring a double shot of coffee over two scoops of ice cream and then hitting it with a stick blender.
Why, it’s like listening to music by moonlight.
at June 30, 2008

Email ThisBlogThis!Share to TwitterShare to FacebookShare to Pinterest
Labels: food